Exploring Evidence: A Challenge before Nurses of Today

The review article presents the obstacles and the solutions towards the implementation of Evidence Based Practice among the nurses in India by merging the content and concept from a few set of related articles by the experts and those include K Gitumoni and K Jyasree. The barriers and challenges of conducting nursing research and communicatoing findings into practice. Daphne c duncombe. A study of perceived barriers and faciliattors to implement evidenced based practice. Joan and Warren. A crosssectional study to assess the strength and challenges to implement ebp in nursing. B Mauricio, Implementing evidence based practice : a challenge for the nursing practice. M Neda and B naser . Nurses faculties knowledge and attitude on evidence based practice. The successful utilization of best evidence into practice depends on the knowledge of nurses , understanding the concepts, and its application. There exists various barriers and facilitators as well to the application of EBP among nurses. The practice can be a successful and routine process in an organization only if there could be support, encouragement and recognition by the administration. The health care team in India must provide an indispensible support to eliminate those barriers and facilitate the optimal care through best evidences in the health care facilities. Thus the article comprises a cross cut view on the obstacles in the application of best evidences in the clinical setting.

Evidence based practice is a conceptualized approach and is considered as a transformative channel through which patient outcomes and quality of care can be improved. From an indepth analysis, evidence based practice has become a challenging factor to promote an advancement and development across the world of nursing practice. Comparatively, the Indian nurses are least involved in the assessment and implementation of EBP .Based on the Indian standards of practice, it is expected that nurses are at the forefront of EBP implementation in the clinical setting and they do not receive relevant training or support. Hence , it is not practical to expect the nurses to implement the process in the clinical setting without proper training and continuing education programmes that would stress on the importance of research utilization (Figure 1) [1-5]. 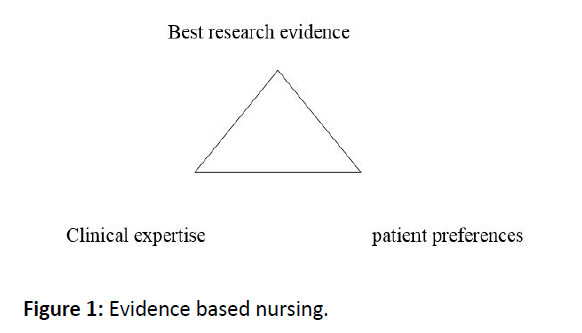 The main focus of evidence based nursing is to provide best health care practices by utilizing the recent and latest scientific process in the health care field thereby minimizing the errors and maximizing the effect in the client outcomes. Ebp may facilitate the improvement in health care systems, client outcomes, performance of nurses and other health care workers. It is a great challenge to new as well as experienced nurses as the practice requires the use of clinical judgment and considering the patient value. As per the researchers Gitumoni and Jayasree Clinical judgement is considered the key to better health as the practitioners need to make the best accurate decision that will result in least health effects on patients. Ebp can be a consultative and wholly engaged process in which nurses make decisions based on best practice and client outcomes. Nevertheless , this practice can be an opportunity for nurses to improve their quality care giving, but it mostly remains as a concept in the books and distant from everyday practice.

Evidence Based Practice and Nursing

The contributions of EBP in a health care system are numerous and those include It can develop practice guidelines for health professionals. It develops nursing as science and enhance their autonomy. Improve health outcomes of patients. Cost effective care.

A study was done by Gitumoni and Jayasree examined the knowledge and attitude of nurses towards the use of evidence found that there was a lot of variance in EBP knowledge among nurses.Thus it was concluded that our nurses need to have specific education on research and its practical implications, leadership in implementing the evidences and creating a favorable working environment to perform effectively with the implementation of the evidences in their practices[6].

How can EBP be Applied Clinically????

The central aspect of EBP is that it improves patient outcome through safe, effective and efficient care. It has solved most barriers associated with traditional and current treatment for emerging and reemerging diseases. EBP is applied into clinical practice only through a well structured education and learning system and can be successful only if the nurses are involved in its implementation as they comprise the major population in the health care field .So, any change that can happen within the clinical setting depends on the positive response from the nurses. Secondly, nurses are the ones who are intimately involved in the continuum of patient care comparing to the other health care professionals. Amazingly, the Indian nurses are still denied to have training programmes on the implementation and provided no support from the respective higher authorities to implement the EBP in clinical setting[7-9].

The factors that enable the evidences into practice involve the ability to appraise and utilize that evidence in decision making. For making this happen, the Indian nursing council and research centre must make an investment in curriculum development with establishing new programme standards for under graduate and postgraduate levels of education that can fix the objectives on decision making, system of care and creation of a specialty for evidence based nursing . The EBP models that have been developed can be contributed to extend this particular field that include the utilization of the findings and knowledge transformation into practice.

A descriptive study was conducted on nursing faculties’ knowledge and attitude on evidence based practice by Neda mehrdad and Naser bahrani that was published in Iranian journal of nursing and midwifery research. They have used a descriptive design and it was conducted in two different universities under ministry of health and medical sciences. Participants were all nursing staff providing nursing education in Tehran . A 3 section questionnaire was used with a response rate of 78% and result was that knowledge level was seen moderate among which 61.4% were totally unaware about the Cochrane collaboration as a source for EBP , but had positive attitude and found no statistical significant relationship with demographic variables. As a conclusion, it was found that a significant relationship between knowledge of nurses and level of education (p<0.001).Besides, a greater number of participants were familiar with techniques of literature review , but unknown about the Cochrane database. The researchers have considered the fact that a well defined nursing education policy makers are required to use the opportunity to hunt towards the EBP paradigm. But the study was limited to only one particular hospital and that could be considered as drawback of the study.

Obstacles that Pull away the Zrontline Professionals from Practicing Ebp

The outlook of public towards nurses is just as a care provider and not as a researcher. Since the milestone of nursing period developed, from the time of Florence Nightingale, nurses are just trained to provide safe, efficient and quality care to patients. They are permitted to apply their knowledge and skills what they have learnt in college. So, their view and ideas are limited to a single and simple intervention system . A registered nurse is stated to contribute to good quality care and relevent research along with. Thus , the words, practice and research are two sided of the same coin which are intricately intertwined. Yet, our Indian setting hinders the process of the transformation of research into practice. Nurses must be provided oppurtunities to carry out researches outside the clinical area , thereby introducing research findings in their own familiar clinical area, so that, an interest and initiative can be developed among nurses to implement the valuable evidences in to practice., Hence, this way, our nurses must get accurate and optimal training inorder to practice such evidences . Unfortunately, adequate training of nurses in research evidences remain a challenge within our health care system.

B Mauricio had conducted as cross-sectional study on implementing evidence based practice : a challenge for the nursing practice in 2014. The study had concluded with certain other factors that were causing confrontation for the nurses from utilizing the best evidence into practice were lack of access to research, poor resources, lack of knowledge for making a critical overview, insufficient time, and lack of support from the organization. The corresponding study had thus found out the optimal solutions that could erase the obstacles through a culture and context that support EBP and developing a critical mass of professionals trained who can collaborate with clinical staff in the application of best practices. Certain areas in the study were observed less relevant to the problem and couldn’t reach upto the readers expectation and the respondents number was inadequate too.

Lack of Time and Ignorance of the Best Evidence

The work load has kept way our nurses from having research thought process within them. As the shortage of nurses increases, the work load also increases . Lack of time is considered as the major barrier for 45 % of the nurses to put forth with own research concepts.

Nurses also find it difficult to analyse what is described in the journal studies as they contain plenty of information that would be confusing and difficult to be interpreted. Therefore they find it hard to identify the exact information and to utilize them into setting.

A multi institutional study on perceived barriers and facilitators to implement evidence based practice was done by Daphne C Duncombe in buhamas. The objectives were to examine the barriers and facilitators to implement EBP. The study was conducted among nurses who worked in psychiatric, geriatric , and community settings in Bahamas. A descriptive and comparative design were used and self administration questionnaires were administered among 100 samples who were selected by stratified random technique, with a five point likert scales used to assess the barriers and facilitators. The study concluded that 72.5% of them had never tried to implement EBP. The barriers identified were inadequate resources (85.2%) , inadequate training ( 83.6%), the top facilitators identified were training in research methods( 88.5%), organizational policies ( 86.9%).Thus for the successful implementation of EBP , efforts and interest among nurses and health care organization are at any cost ,needed.The study was successful in detailing the barriers by going through samples from different setting without prompting to bias. The study had focused to the priority of evidence based practice in institutional and government levels that had enhanced the value of the study. Yet, the study could have proved if any association of the barriers with baseline variables of the samples selected, so that this would have helped the researcher to explore various ways to modify such barriers.

High effort needed to implement and use.

Not relevant in effective and efficient care.

Nurses are least important in the implementation of best evidences.

A descriptive study was conducted by Joan and warren in 2006 to evaluate the strength and challenges for implementing evidence based practice in nursing across a 9 hospital system located in mid atlantic region. Cross sectional survey of 6800 registered nurse was conducted to learn about attitudes, beliefs, perception towards the implementation and concluded that the response was positive from young and experienced nurses towards the utilization of the best evidence but they reported that their ability to implement ebp is extremely low. The sample size was adequate , but the time constraints and found conflicts from personal issues were found to be the limitations [10].

Although EBP is considered to be a part of health care system, the nurses in many studies have reported very low response in practicing it in the clinical setting. The time has reached to frame out the nurses leaders as the leadership and administration play a key role in implementing EBP. The barriers that have been revealed must be recogonised by the authorities concerned in India , thereby formulating a policy so that the nurses can experience the core competency in their work settings. This article can be implicated for the further studies on Evidence based practice and its utilization among the health care professionals in any setting.